Solar Thermal Hot Water - The power of the Sun

There’s no better way to heat the hot water for your home than heating it for free!

Solar thermal is a fantastic technology and can provide up to 60% of a households hot water requirements and can be effective on cloudy days.

Solar thermal is best suited for properties with a roof that faces to the south, or south west to maximise the exposure of the panels to the sun throughout the course of a day but even if you don’t have a south facing roof there are ways that the panels can be installed to overcome these issues such as A frames or split systems where panels are installed to both front and back of the property. 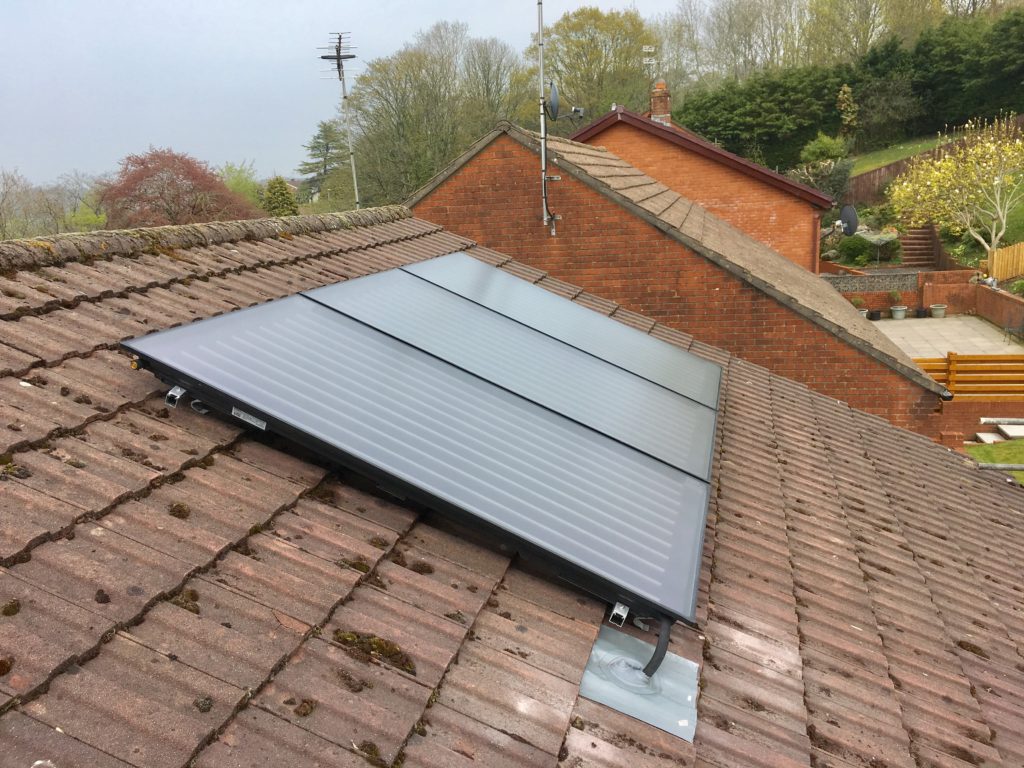 Gravity heating and hot water system along with shower pump was how the system ran before the installation.

The finished article all lagged, wired up and working beautifully. The customer was very happy with what we had done and although it may look complex was very pleased with how easy it is to operate.

The TDS100 is the basic solar hot water controller supplied with the system, it's very easy to use and once setup there's no need to play around with it other than to monitor temperature readings.

The Worcester greenstone cylinder comes with a 25 year guarantee and 10 year guarantee on external components. A pump house high temperature removal pump was needed due to the location of the system to remove the safety discharge pipework water. We like to use copper for all of our installations if possible, it's strong, malleable and fully recyclable.

The Worcester Cdi system boiler was installed in the garage, the boiler had its heating power down rated to match the heatloss of the property and maximum temperature rated to 70c.

The glowworm had served the property well for over 20 years but it was time to make way for a 20th century system.

In the Video below Roger Bisby explains a little more about the Worcester Bosch system.

We don’t just install solar thermal systems we maintain them too!

As with any heat source within a property it’s vital that they get looked after to avoid any premature failure which could result in high repair costs. A solar thermal system uses a substance called glycol as the heat transfer fluid to prevent frost damage during the colder winter months. Over time the glycol will degrade and it’s ability to stop freezing will deteriorate, at the same time if the system is not being used in the most efficient manner or turned off  the glycol can also bake within the panels and turn into a sticky substance which is unable to be circulated around the system.

It’s vital that the quality of the glycol is monitored and replaced as soon as it starts to show signs of degradation, if it’s ignored it will almost certainly render the whole system useless and will more than likely need to be replaced. However we have come across systems that can be restored by adding chemical cleaners via solar pumping machine and circulated around the system to break down the glycol and restoring the system back to a reasonably working order.

Below are a few images of maintenance carried out on a solar thermal system in Penarth.

Glycol that was well passed it's use by date being drained from the system.

Removal of the expansion vessel and recharging the pressure on the diaphragm.

We added a fernox solar cleaner via our solar machine and circulated it for four hours, the solution is then removed and flushed with clean water until happy with the results. The system is then drained, replenished and charged with fresh glycol.